We have a 3 part audio teaching immediately below named “Discernment on Music”. A much needed study on what biblical music/worship looks like. A great text study is below too. You may also click the “music” menu link above for godly music and here for a teaching on the demonic CCM (contemporary “christian” music) industry.
CLICK BELOW FOR THE AUDIO TEACHINGS.

Here is an article from a book called “Did Jesus Correct Moses?”   I could not recommend this book more! A must read!

What about Musical Instruments?

Here is an issue where some would declare that God has changed his mind; but a careful study reveals that God has been very gracious in accepting man’s show of affection. To sing praises to God with musical instruments is still pleasing to God when it accompanies a sincere heart of reverence rather than a cloaked show off session and gratification of the flesh.

The spiritual climate and order where God chose to establish the church of Jesus Christ was one that did not employ the ancient instrumental worship of the Jews; but we are told that the synagogues just had prayer, reading, a sermon, and singing. The worship with musical instruments seems to be confined to Temple worship or personal use, and was not a part of the synagogue service. The Psalms which recommend this type of worship are speaking of Temple worship.

Jesus and His Apostles set up the church after the pattern of the synagogue and the Temple was destroyed. This seems to indicate that since the Temple is gone, and we are following the pattern of the synagogue, we should continue the church’s worship after the way the Apostles started it. The order of the synagogue was a God ordained arrangement which Jesus used and endorsed. When Christian Jews were kicked out of the Jewish synagogues they started Christian synagogues, which we call churches – both words refer to an assembly.

Jas 2:2 For if there come unto your assembly a man with a gold ring, in goodly apparel, and there come in also a poor man in vile raiment; {assembly: Gr. synagogue}

Just as all other parts of the Ceremonial Law that required the temple are now done away, so it seems that temple worship with musical instruments was also done away; at least for public worship.

Did Jesus imply that worship would change?

Jn 4:20 Our fathers worshipped in this mountain; and ye say, that in Jerusalem is the place where men ought to worship. 21 Jesus saith unto her, Woman, believe me, the hour cometh, when ye shall neither in this mountain, nor yet at Jerusalem, worship the Father. 22 Ye worship ye know not what: we know what we worship: for salvation is of the Jews. 23 But the hour cometh, and now is, when the true worshippers shall worship the Father in spirit and in truth: for the Father seeketh such to worship him. 24 God is a Spirit: and they that worship him must worship him in spirit and in truth. 25 The woman saith unto him, I know that Messias cometh, which is called Christ: when he is come, he will tell us all things. 26 Jesus saith unto her, I that speak unto thee am he.

The woman of Samaria knew that when the Messiah came, He would explain hard issues and answer hard questions. In the matter of worship Jesus clearly says there is going to be a change from a more ceremonial worship in a certain place to a more spiritual worship without a specific location. This was facilitated in the synagogues spread all over the civilized world as God’s fertile field intended for the rapid spread of the Gospel. Jesus preached in the synagogues and His churches were established after the order of the synagogue; so let’s just keep the same basic pattern. Here are the positive commands in the New Covenant:

Heb 13:15 By him therefore let us offer the sacrifice of praise to God continually, that is, the fruit of our lips giving thanks to his name.

Eph 5:19 Speaking to yourselves in psalms and hymns and spiritual songs, singing and making melody in your heart to the Lord;

Col 3:16 Let the word of Christ dwell in you richly in all wisdom; teaching and admonishing one another in psalms and hymns and spiritual songs, singing with grace in your hearts to the Lord.

Jas 5:13 Is any among you afflicted? let him pray. Is any merry? let him sing psalms.

I have nothing personal against musical instruments; but simply believe the church is wiser to continue with the pattern Jesus set.  There may be reasons for this pattern which we do not know. It is not a moral change in God, as nothing has been forbidden in this area which was previously commanded in the Law; and only those who really tune in and care will even catch what I am saying and follow it. God is gracious, but reveals His will to those who tune in and care.

There are some cautions concerning musical instruments and we can see how they have been and are being abused for the gratification of the flesh.   Children who are taught to play instruments are in great danger of becoming “performers” rather than “worshippers”. They practice and practice for the eyes and ears of men. Most people won’t even bother with the hard work and time involved in learning an instrument if they cannot perform for someone. If I let my little girl labor and toil and learn to play the piano, then every time the grandparents or others visit there will be the temptation to say, “Show them what you’ve learned”. Then the little girl’s labor is rewarded by what? By performing and hearing the “O that is so nice” response of the audience. And how is it that you show your skill on an instrument? By playing slow and reverent? No, but usually by playing fast. I’ve seen the fruit of all this first hand, and believe that acapella worship is pleasing to God and attended with less danger.

The churches were patterned after the synagogues where they had no musical instruments; and the early Christian churches rejected musical instruments in group worship.  I found an interesting article from Thy Word is Truth website, and felt it was worthy of posting here:

“Acapella means “as in the chapel.” The music of the church was acapella for centuries. The first organ was introduced in worship by Pope Vitalian I some 670 years after Christ. When it threatened the division of the Catholic church it was removed. However some 130 years later it was again introduced, this time successfully though there was still some opposition. The Greek Catholic Church refused it and still refuses it.  Martin Luther rejected the organ as an “ensign of Baal.”  John Calvin said of the organ in worship (things had not yet reached the orchestra stage), “It is no more suitable than the burning of incense, the lighting of tapers or revival of the other shadows of the law. The Roman Catholics borrowed it from the Jews.”  John Wesley, when asked about the use of the organ in worship, brusquely replied, “I have no objection to the organ in our chapels provided it is neither seen nor heard.”  Adam Clarke, a great commentator and a contemporary of John Wesley, said, “I am an old man and an old minister, and I here declare that I have never known instrumental music to be productive of any good in the worship of God, and have reason to believe that it has been productive of much evil. Music, as a science, I esteem and admire, but instruments of music in the house of God I abominate and abhor. This is the abuse of music, and I here register my protest against all such corruptions in the worship of that Infinite Spirit who requires His followers to worship Him in spirit and in truth.”

Bob Williams in a scholarly article, Origins of Christian Worship, shares the following:

“A significant difference is seen between the dramatic worship exhibited in the temple (both the first and the second) and the restrained and subdued gatherings in the synagogues. While the focus in the temple seemed to be mainly upon exuberant worship and praise through sacrifice and music (both vocal and instrumental), it seems that the main focus in the synagogues was not so much upon public worship, but rather upon instruction in the Law. The worship of the synagogues was apparently limited to recitation of prayer, chanting of the Psalms, and Bible reading and instruction… While it has been suggested by a few that the early Christians may have reintroduced a form of melodious singing similar to that found previously in the temple, the vast majority of scholars state that the music of Christian worship was limited to the same plain chant as had been used in synagogue worship, and that it would be several centuries before the introduction of choral melody and/or four-part harmony (or reintroduction, if indeed temple singing was similar to modern day church singing)…It appears that the manner of worship seen in the early church was originally just a continuation of what the Jews had been doing for the previous 500 years (adding only the agape feast and Lord’s Supper on the first day of the week). This was followed by further gradual changes and variations, but the basic fundamental aspects of historical worship (singing, prayer, instruction, Lord’s Supper) remained constant. Perhaps this is close to what Jesus had in mind when He stated that worship would not remain confined to specific places, but should always be done in spirit and in truth (John 4:21-24).”

In Heaven – God’s Temple – we again see musical instruments in group worship being used.   This may just be symbolic, as many other things in the book of Revelation are. It is worthy of note that only harps (very mild instruments) are seen in this heavenly worship. Harp music would certainly be more fitting for Heaven than what people usually play on other instruments. Contemporary Christian bands would really feel cramped if all they had were harps!

Re 5:8 And when he had taken the book, the four beasts and four and twenty elders fell down before the Lamb, having every one of them harps, and golden vials full of odours, which are the prayers of saints.

Maybe due to abuse, God stopped the instrumental worship providentially, but will allow it again when we are fully sanctified in Heaven.

Great audio teaching below named The Proper Focus Of Worship.

You can click here or below to read the book. Remember, you do not want to “attract” people carnally. Be edified and worship in Spirit and truth. 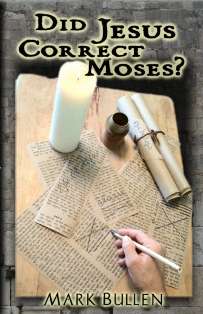