So we have, according to the World Christian Encyclopedia (2001, 2nd edition): 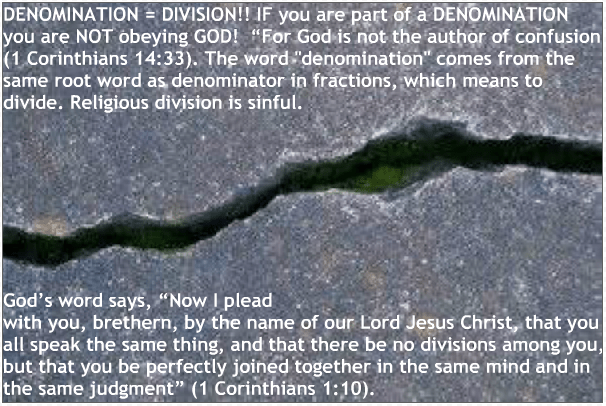 These 33,000 are subdivided into “6 major ecclesiastico-cultural mega-blocs”, and ordering them by

denomination size we have (I am rounding up or down slightly for convenience, using year 2000 figures) :

Today there are more than 600 different denominational churches, each teaching different man-made doctrines, each with different forms of worship, each with different human devised plans of salvation, and each wearing different religious names. There is no scriptural justification for this confusion, “For God is not the author of confusion” (1 Corinthians 14:33). What do you think the Lord thinks about all of this? Such cannot be pleasing to the Lord. The word “denomination” comes from the same root word as denominator in fractions, which means to divide. Religious division is sinful. God’s word says, “Now I plead with you, brethern, by the name of our Lord Jesus Christ, that you all speak the same thing, and that there be no divisions among you, but that you be perfectly joined together in the same mind and in the same judgment” (1 Corinthians 1:10). This is not happening in denominationalism. Denominations are of human origin and have no scriptural authority to exist. Every denomination is in conflict with the one church which Jesus built.

Jesus says in Matthew 16:18, “I will build My church”. The word “church” is singular, meaning one and only one and the word “My” is possessive, meaning it belongs to the Lord. The Lord only built His one church. Jesus never promised to build even one denomination. The church of Christ , which Christ built, began nearly 2000 years ago.

There were no denominations in the first century and for hundreds of years thereafter. The Lord did not establish any of the denominations, but man did. The denominations have had their beginnings during the past 500 years. The Lord never built any of the more than 600 different denominations so man could have a choice of which church he wants to join. All of this is man’s doing. Now there are literally hundreds of differing denominations, each with its own name, its own peculiar man-made doctrine and practice which contradicts the Bible. How can any of these differing doctrines be true? They can’t. Anything that contradicts or is different from the Bible is false doctrine, which is designed by Satan to cause people to be eternally lost. Their divisive human creeds that govern them come from the minds of men and not from God. Their creed books hold their group together as a denomination. Methodist Churches preach the Methodist Discipline, Baptist Churches preach the Baptist Manual, Catholic Churches preach the Catholic Catechism, etc. The main reason for the religious division of denominationalism is man will not accept God’s word as final authority.

They all add and take away from the Holy and Pure Word of God. The 66 inspired books of the Bible. They are cursed and their names are ERASED from the Book of Life! Even most all “non-denominational” churches are preaching wrong doctrine handed down from these wicked denominations.

Rev 22:18-19 “For I testify unto every man that heareth the words of the prophecy of this book, If any man shall add unto these things, God shall add unto him the plagues that are written in this book:  19 And if any man shall take away from the words of the book of this prophecy, God shall take away his part out of the book of life, and out of the holy city, and from the things which are written in this book.”

Even by their names they do not claim to be the Lord’s church. They seem to be ashamed of the Lord by not wanting to wear His name. Jesus 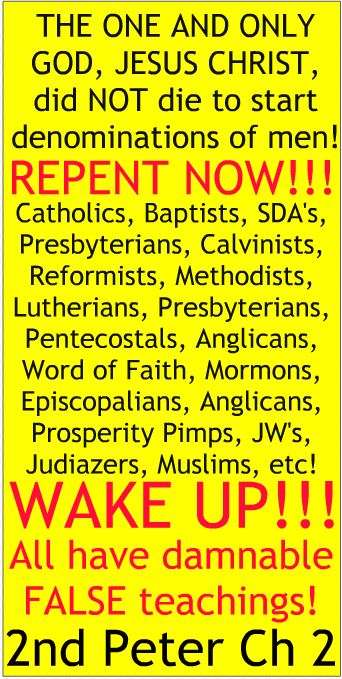 says, “For whoever shall be ashamed of Me and My words in this adulterous and sinful generation, of Him the Son of Man also will be ashamed” (Mark 8:38). If the Lord is ashamed of people, they will be eternally lost in Hell. Since they are not the Lord’s church they call themselves by names that give glory and honor to the many different people, places, or things other than the Lord. The Lutherans honor their founder, Martin Luther. The Methodists who were founded by John Wesley give honor to the methodical way they do things. The Presbyterians founded by John Calvin give honor to the presbuterous (Greek word for elders). The Baptists give their honor to John the Baptist while the Pentecostals give honor to the Jewish Day of Pentecost. The Apostolic Church give their honor to the apostles. And the list goes on and on. All denominations are unscriptural since each denomination has a human founder, and not Christ. Denominationalism is plagued with division, conflicting creeds and doctrines, unscriptural worship, and false “salvation practices”, which leave a person lost since it is different from what God requires in the Bible. They want to do man’s will and not God’s will, thus God will not save them in their folly.

When a church has the wrong name, teaches the wrong doctrine, is organized the wrong way, worships the wrong way, has the wrong terms of membership, and the wrong plan of salvation, it cannot be the Lord’s one true church. A denomination is a substitute of man’s creation and has no authority from God to exist. What benefit is there in joining a man-made denomination? One will be eternally lost in doing so. As sad as it is, Jesus says, there will only be a few people in this world saved (Matthew 7:13-14). This is in spite of the Lord making a tremendous sacrifice for unworthy man to enable him to be cleansed from soul condemning sin so he can be saved. The division and confusion of denominationalism has paved the way for atheism, agnosticism, humanism, skepticism, modernism, and a denial of the Bible. This division is in contradiction to the prayer of Jesus for all who claim to believe in Him, “that they also may be one in Us that the world may believe that You sent Me” (John 17:21). All of this division and confusion has come from man and not from the Bible.

It is often the case that people do not want the truth. “In latter times some will depart from the faith, giving heed to deceiving sprits and doctrines of demons, speaking lies in hypocrisy, having their own conscience seared with a hot iron” (1 Timothy 4:1-3). Denominations have their conscience so seared with false teaching that, most of the time, they are impossible to reach with the truth of God’s word. Near the end of the first century the apostle John said, “many false prophets are gone out into the world” (1 John 4:1). They are still around and have had 1900 years to multiply.

Men have altered, revised, manipulated, rearranged, added to, and ignored what God has said in the Bible into whatever they have seen fit. “There is a way that seems right to a man, but its end is the way of death” (Proverbs 14:12). The confusion in denominationalism is guided by opinion, pride, prejudice, impulse, physical sensations, emotionalism, and assumptions. Denominations give their allegiance to the authority of men over that of Christ. Since God’s word is true (John 17:17), that which disagrees or is different from it is false. Their sin is not in changing man-made laws, but in making their own religious laws and setting aside the laws of God. All denominations are the result of the many departures man has made from the teaching of the Bible.

People need to repent from the sin of denominationalism and get right with a Holy God.

Romans 12:5  So we, being many, are one body in Christ, and every one members one of another.

1 Corinthians 10:17  For we being many are one bread, and one body: for we are all partakers of that one bread.

1 Corinthians 12:12  For as the body is one, and hath many members, and all the members of that one body, being many, are one body: so also is Christ.

1 Corinthians 12:25  That there should be no schism in the body; but that the members should have the same care one for another.

Ephesians 4:4  There is one body, and one Spirit, even as ye are called in one hope of your calling;

Colossians 3:15  And let the peace of God rule in your hearts, to the which also ye are called in one body; and be ye thankful.

Amos 3:3  Can two walk together, except they be agreed?